Hello readers, it’s Shane. You might know me as Cannonballlover on the forums. It’s been a while since we’ve done a ride review. It’s that point in the offseason when I think we need to get energized for the coming season, so I’m bringing back the ride review format I used with my Yankee Cannonball review.

Today’s Ride Review will be for Batman: The Dark Knight at Six Flags New England.

Credit to CoasterFreak225 on the forum. 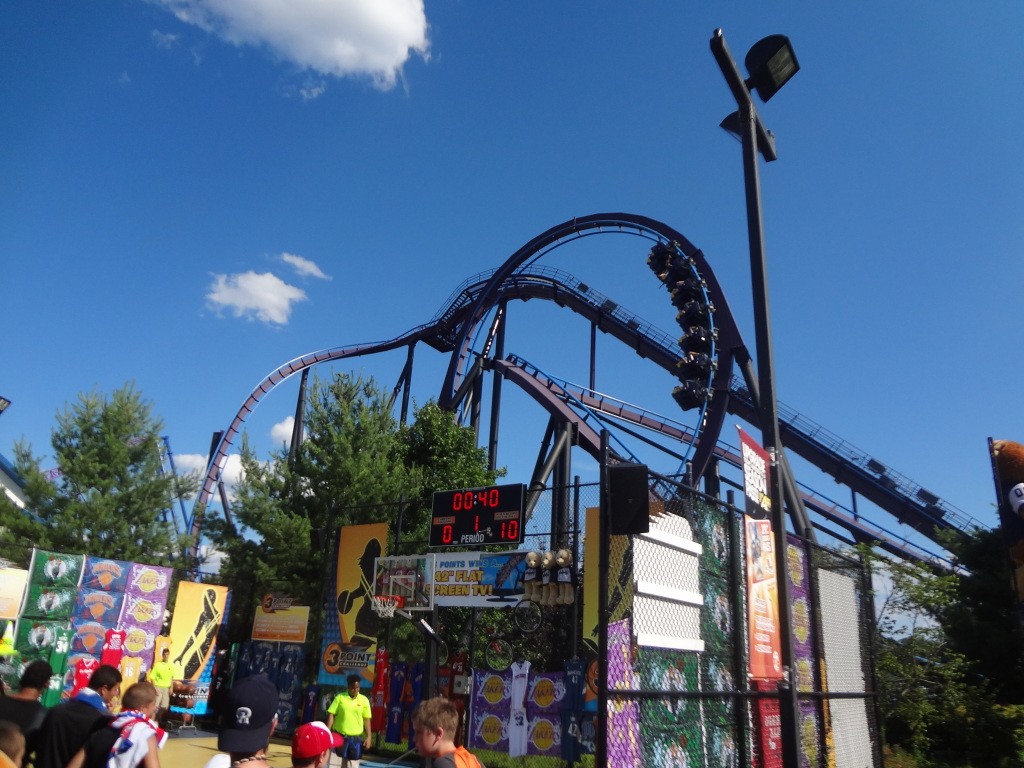 This ride is one beast to look at. To get to Hurricane Harbor, guests have to walk under the brake run. The exit to the ride is underneath the tracks, and the corkscrews are on their own cool plot of land across a midway. This ride is a dark shade of purple with light blue track. It’s impossible to not hear its mighty roar as it storms through its short, but extremely intense circuit. 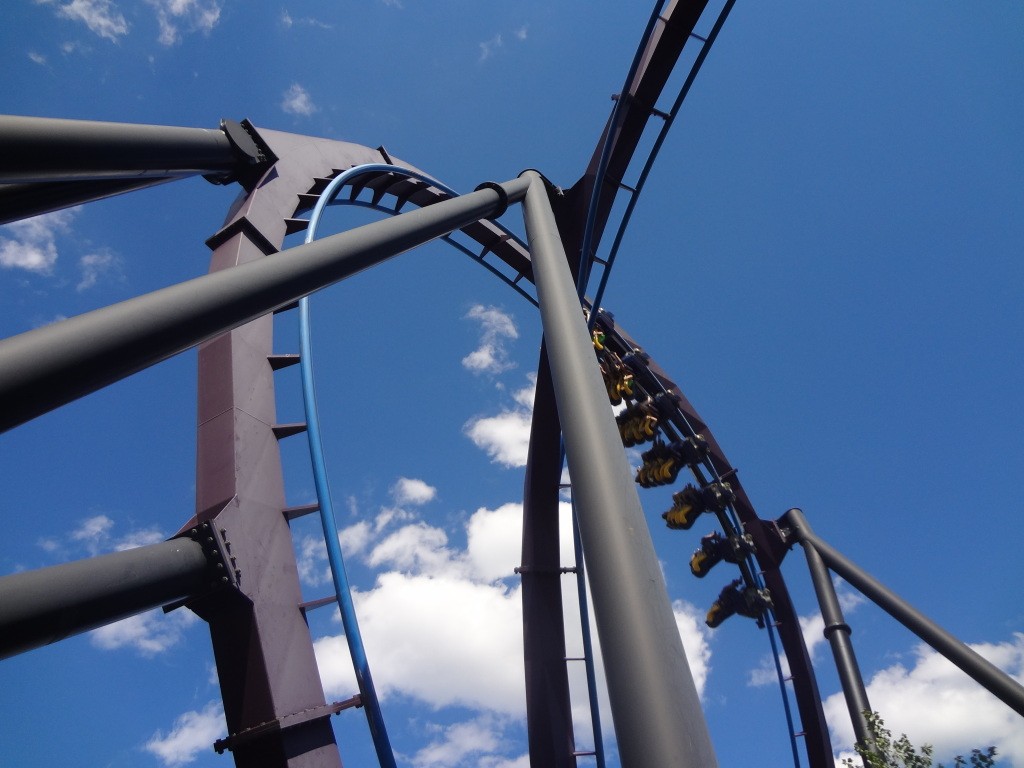 B&M’s are known for being smooth, but sometimes not very forceful rollercoasters. This ride is sadly no exception. It looks like it’d provide some insane forces, but it doesn’t. The loop feels like an ordinary B&M loop, no force.  This ride just doesn’t have the forces it looks like it should.

The ride is incredibly smooth, however. The trains (which only have seven rows, something that’s uncommon on other floorless coasters) navigate the track very well. The loop is as smooth as glass, the barrel roll and dive loop are the same way. Absolutely no headbanging. The only thing is the first corkscrew might bang your head once or twice, but even then it’s almost practically unnoticeable. 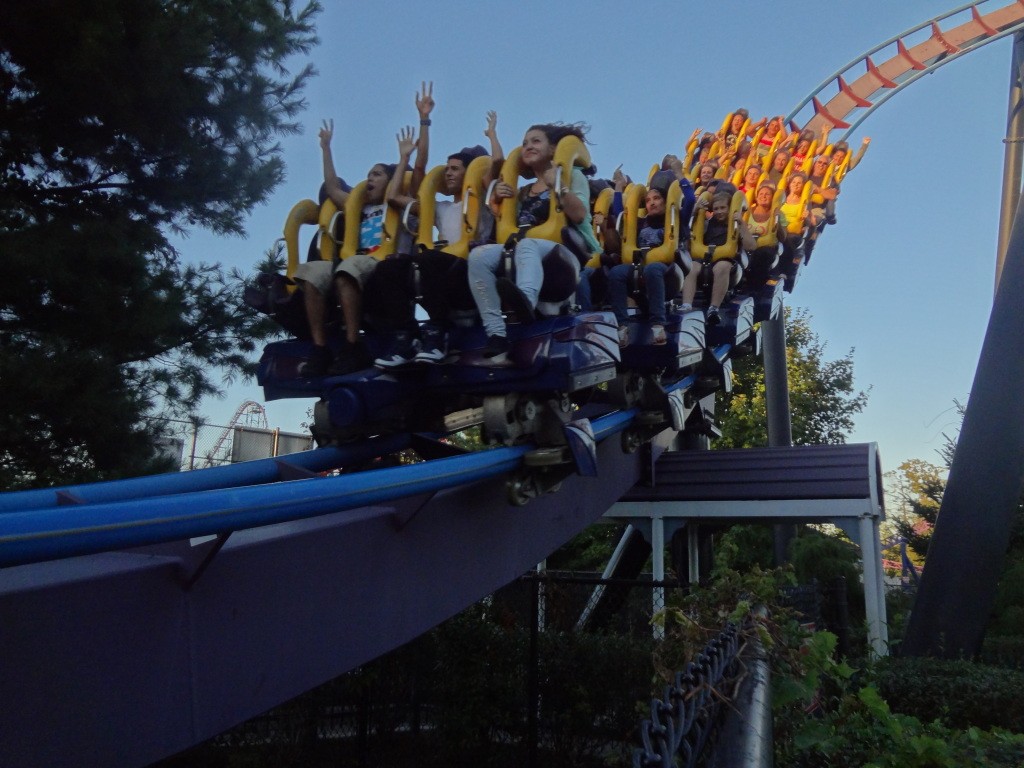 The best part about Batman: The Dark Knight is the amount of inversions that was squeezed in such a tiny space. After the drop, it’s a disorienting journey through loops, corkscrews, barrel rolls, and dive loops. There are 5 fun inversions on this ride. 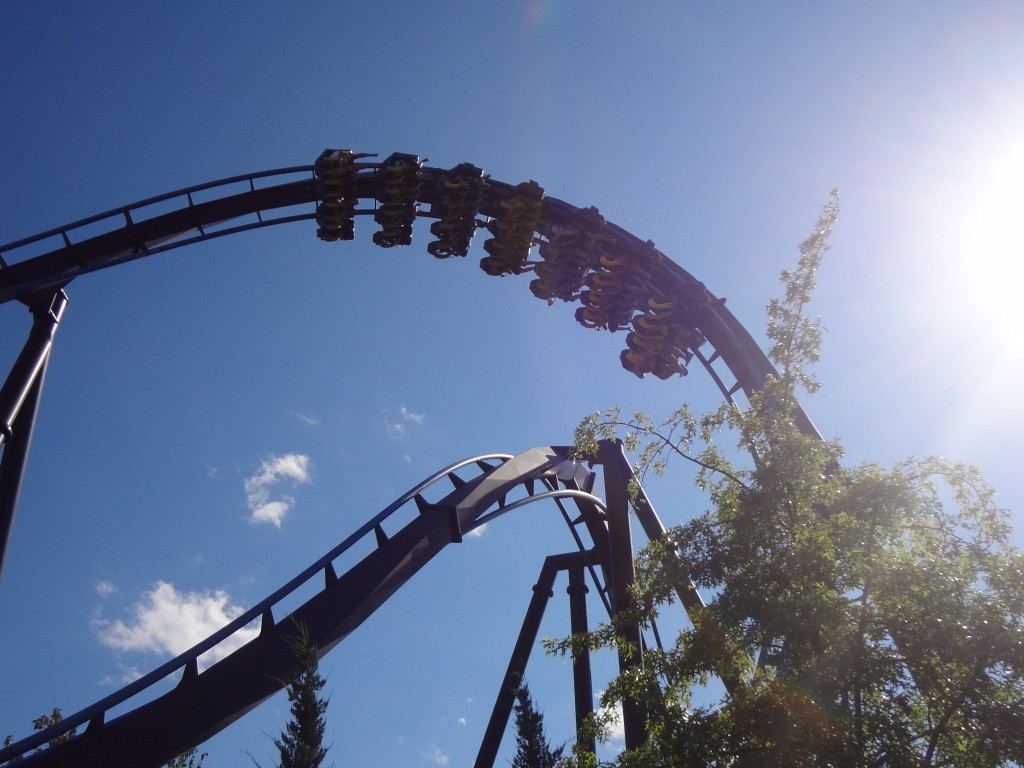 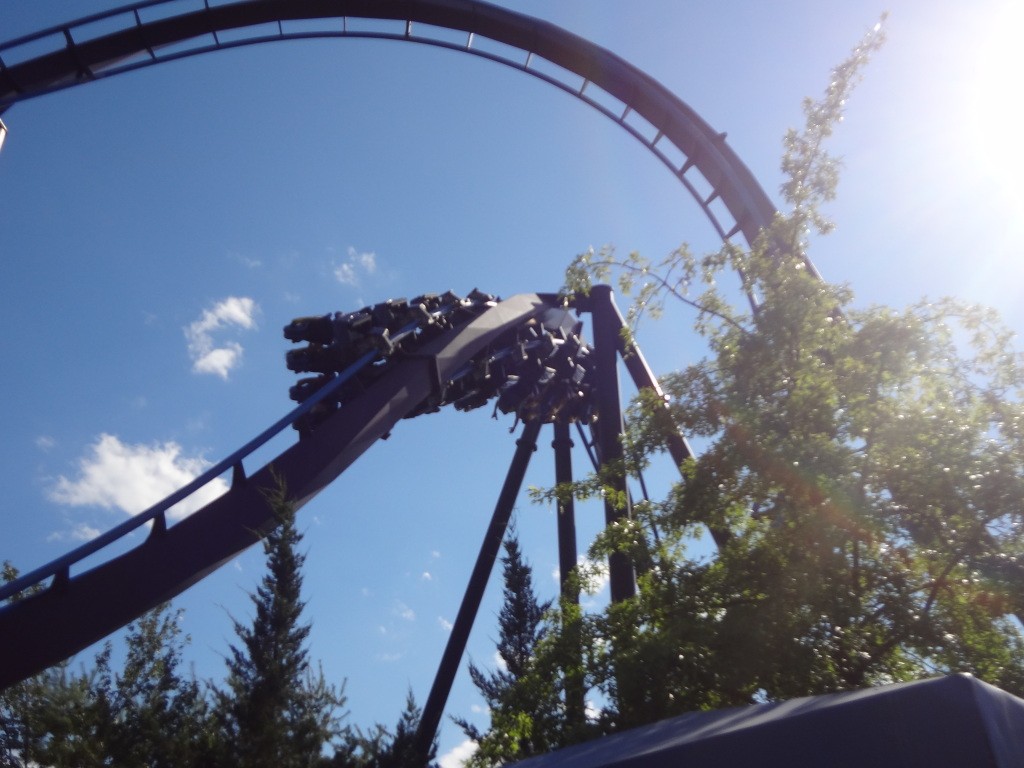 For a first time rider, I was very scared of Batman: The Dark Knight. The amount of inversions, the screaming from riders above, and the people sitting in the brake run in utter shock, all got to me and got my adrenaline pumping. For a person who’s not an enthusiast, this could perhaps be the most thrilling ride in the park. It’s got enough action for an adrenaline pumping, mind blowing experience.

After a few times, the ride can get a bit bland, but will still provide some good fun nonetheless. 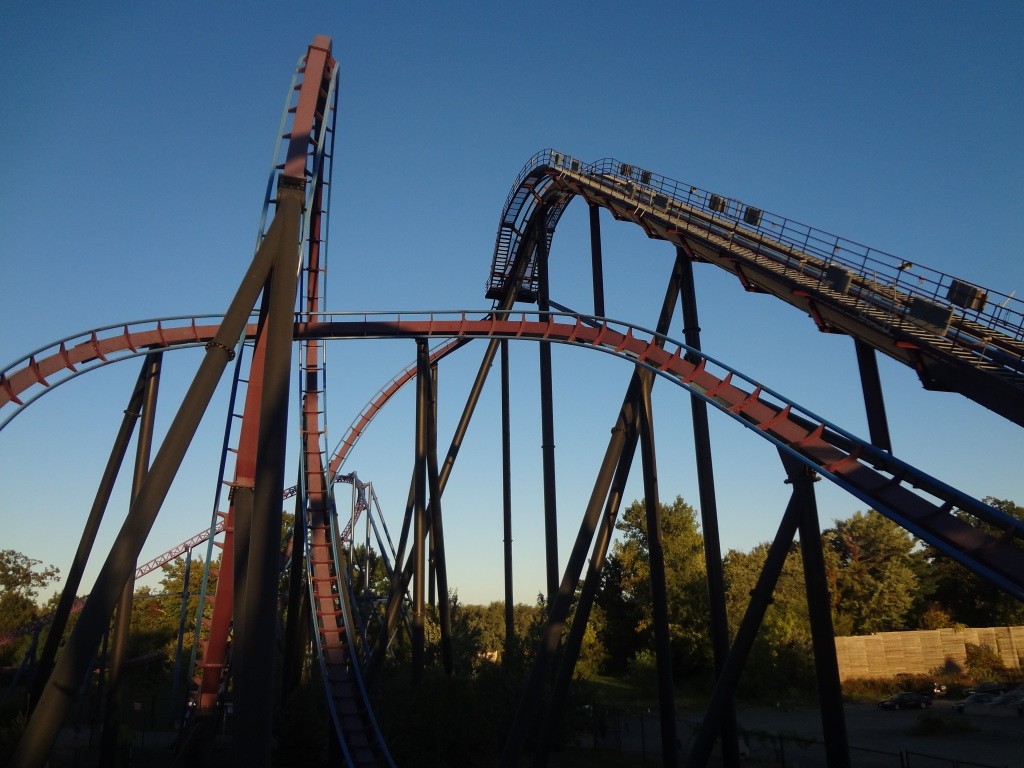 B&M’s are known for not having many issues, and thank God this ride is in that category. My only issue with the actual ride is the colors are fading a little bit. Can we see a repaint in the next few years?

Also, SFNE, PLEASE PLEASE PLEASE get rid of the lockers. I know this is extremely unlikely, but I feel ridership would be higher if you didn’t charge people to put their stuff in lockers. 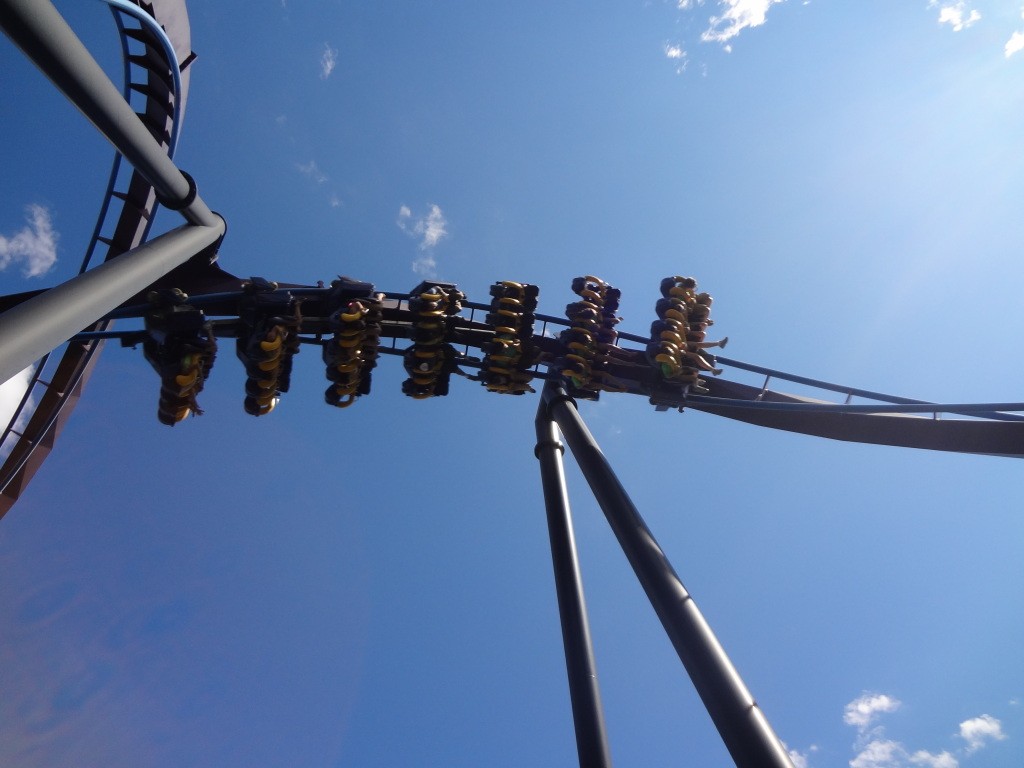 Batman is a fun ride to look at, and ride. Be sure to give it a spin next time you go to SFNE!