Can you believe that it’s that time of year again? Fright Fest is just around the corner with preview weekend starting September 21, just a little over a week away.

Before we get to the line up I’d like to dig up (bad pun intended) this post from the old blog when we were doing our 25 Days of Christmas Wishes:

Today we actually have several wishes but we’re combining them since they both have to do with Fright Fest. One of the wishes is to have Dead Man’s Party come back for Fright Fest. Then another one would be to give the South End a clown/evil carnival take over theme for Fright Fest. The third wish is for Six Flags New England to have an icon for Fright Fest. What I mean by this is that all the other parks in the chain have a character that is in the park every year. Usually this character is the reason Fright Fest is happening. For example, a majority of the parks have Dr. Fright. I know Six Flags Fiesta Texas and Great America have Mayor Slayer. Great Adventure has Dr. Fright AND the menacing Ghoulmaster. SFNE has…. no one.

With the introduction of an icon like Mayor Slayer or Dr. Fright (for many reasons Ghoulmaster is not an option) it would give the park an extra edge against the other haunted events in the area. Mayor Slayer or Dr. Fright could potentially be on all of the future marketing material. People maybe will eventually come to the park just to see the icon like some do at Six Flags Great Adventure with Ghoulmaster. If they so desired they could attach the icon’s name to one of the haunts. The possibilities are endless.

We’re happy to see that with the release of the 2013 Fright Fest information that our 2011 Christmas Wish has come true! That’s right… Mayor Slayer will be taking over SFNE’s Fright Fest this year! Last year the park added Demon District to the South End. What does Demon District consist of? Evil clowns and demons! Another part of the wish granted.

Sadly, last year the park informed us that Dead Man’s Party will likely never return due to the cost of it. This year, however, we’re getting something a bit similar called “The Awakening.” Here is a description of the new show (or is it a parade?):

“A procession of demons slowly escorts a hearse throughout the park led by a sluggish henchman guiding the way with a flickering lantern. The bells toll at 6PM and the vehicle suddenly stops. The zombie chauffer gets out and opens the back allowing the coffin inside to slide out onto the ground. Lights and music start pounding in the air and from the coffin emerges the one and only….Mayor Slayer. The Mayor proudly calls forth representatives from each haunt zone to join him in his celebration. Soon, deranged clowns from Demon District, gravediggers from the cemetery, deceased bandits from Tombstone TerrorTory, and patients from the Wicked Woods Asylum start crawling their way through the crowd to report in. Pleased at seeing all his minions and constituents, Mayor Slayer then unleashes them all to proudly proclaim the night is here with all the frightful fun he oversees that is Fright Fest.”

Sounds exciting right? Mayor Slayer’s reign doesn’t stop there. He has taken over the North End with the addition of a new haunt zone called Undead Alley. At night, The Mayor will also be taking over Pandemonium with the all new Light-mos-Fear.

This fun attraction will spin your head as the lights flicker, suddenly go dark, and dance randomly, as the zombies cackle in the darkness. Music and choreographed lights erupt from within Pandemonium several times an hour with different songs celebrating the reign of Mayor Slayer in this all new special effects show. Undead ghouls nearby scream knowing this ritual celebrates the day Mayor Slayer came to reign. 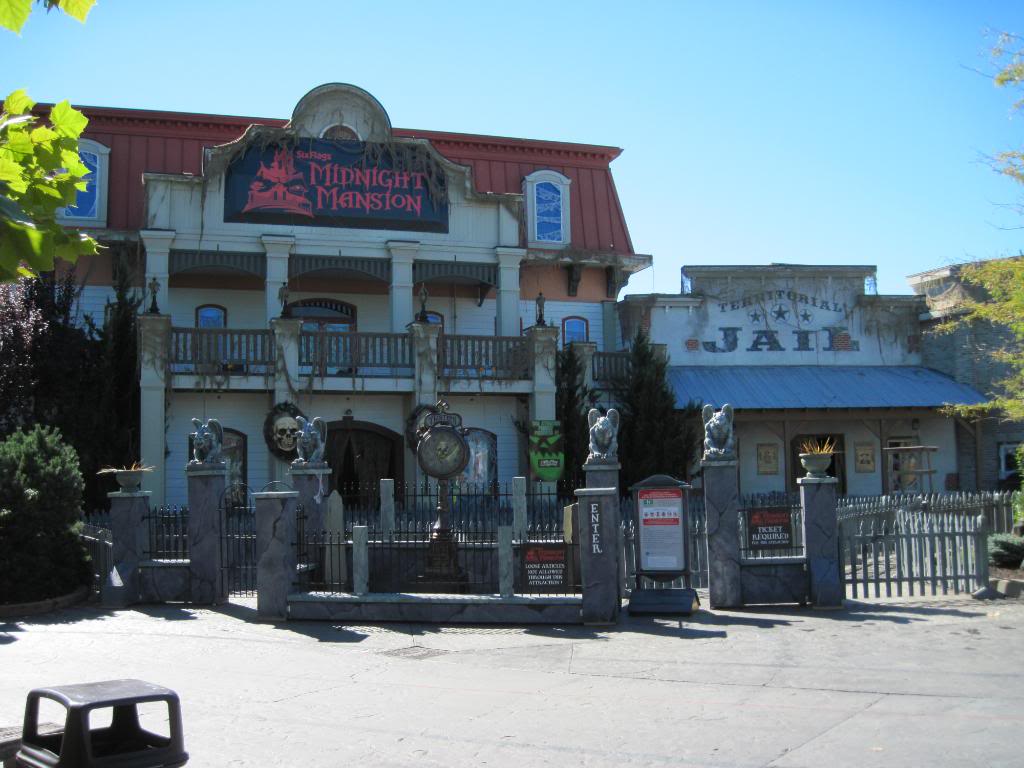 As you explore the haunted dusty rooms of the abandoned mansion, beware of the gory ghosts of homeowners past. This team of vengeful zombies has risen from the dead to haunt, trap, and terrorize uninvited guests. Additional fee is required. Utilize’s the building that Houdini – The Great Escape is located in.

Terror Twist
The evil clowns in Demon District have taken over the Tea Cups. Experience the Tea Cups with fog, lasers, strobes and loud music. Watch this video to see more:

Total Darkness (new)
Are you more afraid of the dark, or the monsters that lie around every hidden corner? Step into a complete blackout and use your senses to navigate your way to the end. You’ll have to face the unknown as mysterious objects and creatures creep along your journey. Additional fee is required. Will most likely be in the Hall of Justice building.

Voodoo Vortex
Kontiki with a lighting and loud music playing as you ride. There really isn’t much to describe about it so watch this video:

Walk through Happy Valley, a town in the middle of the woods.These trees are inhabited by possessed phantoms. Monstrous creatures hide out in the dark shadows, howling and shrieking under the moonlight. Wander the eerie wooded area and find your way through the tangled trees, but watch out for the ghastly eyes glowing in the darkness that are waiting to sneak out and tear you to pieces. Additional fee is required. Outdoor maze in the River’s Edge Picnic Grove. 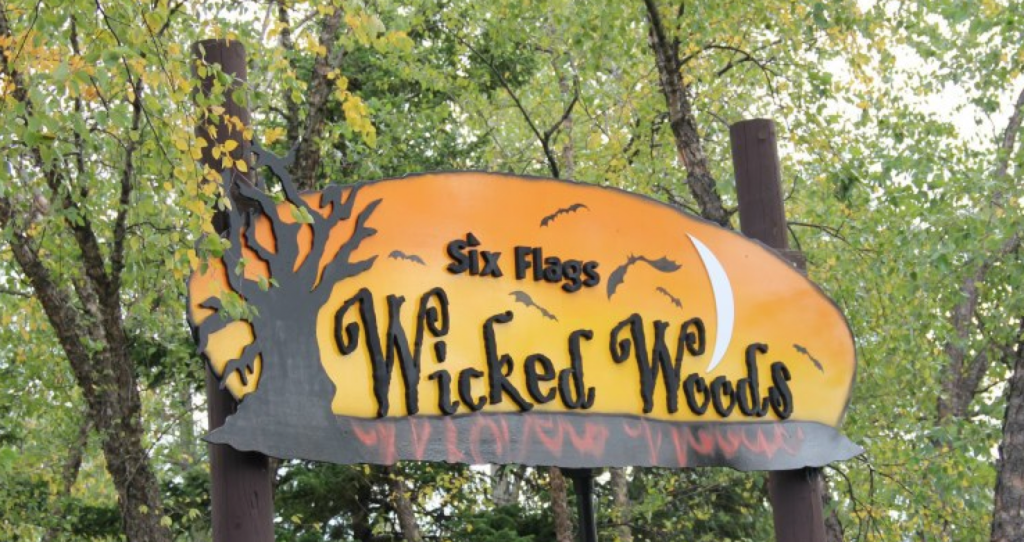 Travel through this haunted graveyard as you explore dirty tombstones, scratched coffins, empty graves, and other cemetery horrors. The undead ghosts, ghouls, and zombies have risen from their burials and creep around the dark graveyard, ready to put unsuspecting trespassers in the ground.

Demon District
Mysterious monsters haunt this area of park. They hide in the shadows, while their cold eyes, creepy grins, and bloody fangs eerily glow under the moonlight. The evil figures lurk in the shadows and watch your every move, until the unexplainable force takes over. Adventurous park guests may enter the area—but they usually don’t come out.

Tombstone Territory
Western cowboys have risen from the dead to creep around the ghost town and terrorize the park. They run rampant through the area, searching for new human brains to feast on. Keep your head down because a bloody battle could occur at any moment.

Undead Alley (new)
When night falls, the monsters come to life to wreak havoc on innocent park goers. The undead zombies run rampant through the area, looking for new guests to haunt.

If you’re planning on visiting Fright Fest with children make sure you stop at each of the following things:

Trick-or-Treat Trail
For a $1 donation to Six Flags Friends, kids can dress up in their costumes and trick-or-treat at the park. Each Trick-or-Treater will receive a bag and wander down the trail to receive special goodies and meet-and-greets with their favorite Looney Tunes characters – who are also dressed up in their Halloween outfits.

Six Flags Spooktacular Street Party
Sing and dance along with our crew of friendly monsters. This high-energy music and dance party will get your hands clapping and feet stomping as you sing along to popular Halloween hits.

Mayhem Mission: Ghoulish Gameshow
This hilarious show lets you participate in the action. Your interactive hosts are playing a Halloween-themed game show, and they need help answering the questions. Test your Halloween knowledge to see if can score big points.

Midnight Mansion Day Time Tours
For a $7 fee, you can enjoy one of our haunted houses without all the gore! Take a daytime tour of the Midnight Mansion, where you’ll travel down the narrow hallways to explore dusty rooms, abandoned props, and mischievous décor. This tour is fun and safe for the entire family because the monsters remain in hiding during the day.

Decorate a Cupcake
At Giftzopolis, for an additional fee, you can decorate your own spooky treat. Pick up a delicious cupcake in your favorite flavor and add all your favorite toppings, including icing, sprinkles, and candies. You can make it as tasty and scary as you want.