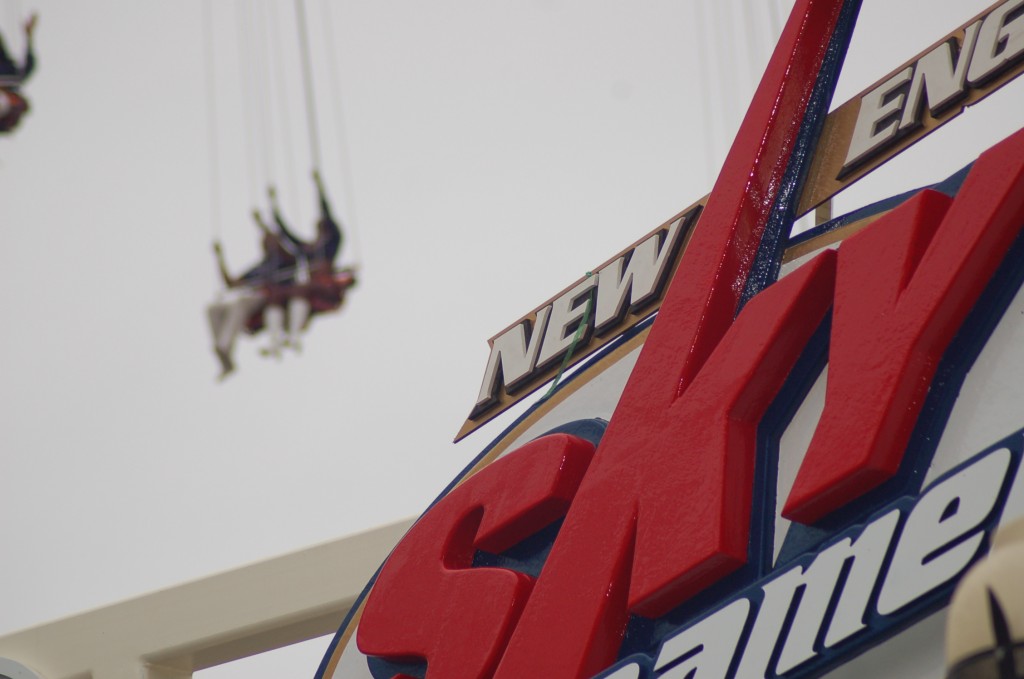 Today was the media event for New England SkyScreamer. Before getting into the details of the event, here are some updates on a few things we reported on several weeks ago. The remodeled snack stand in Kidzopolis will be opening next weekend as Fresh Café. It will serve a variety of healthy food options. We’ve also confirmed that the bumper cars were in fact added to The Flash Pass system despite no mention of it anywhere. Here is a picture of The Flash Pass entrance to the ride. On a side note, New England SkyScreamer is also on the Flash Pass. 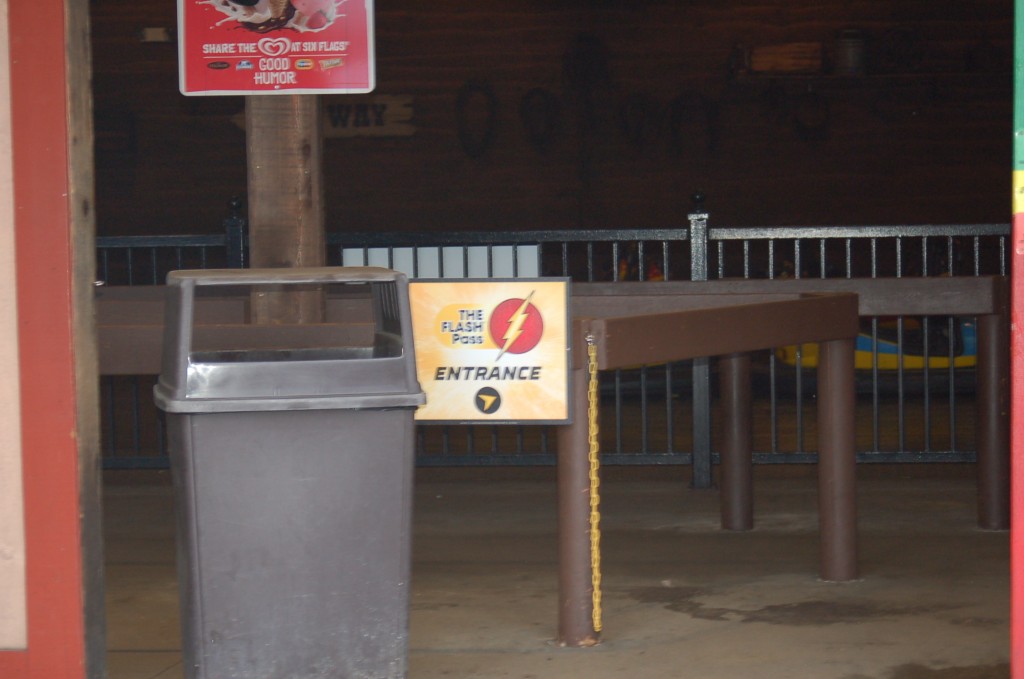 Now let’s get to the event. Much to everyones surprise, the park opened up pretty much all the rides in the North End. Even Scream was open – and running in combo mode! The only rides closed were Scrambler, Balloon Race, and the rides in Looney Tunes Movietown. Goliath was closed as well but it’s not really in the North End so it doesn’t matter. They still had three coasters open when they really only had to open just New England SkyScreamer. The park actually opened at 5 AM for the news stations to get footage for live morning news segments. This is when we got most of our rides in. 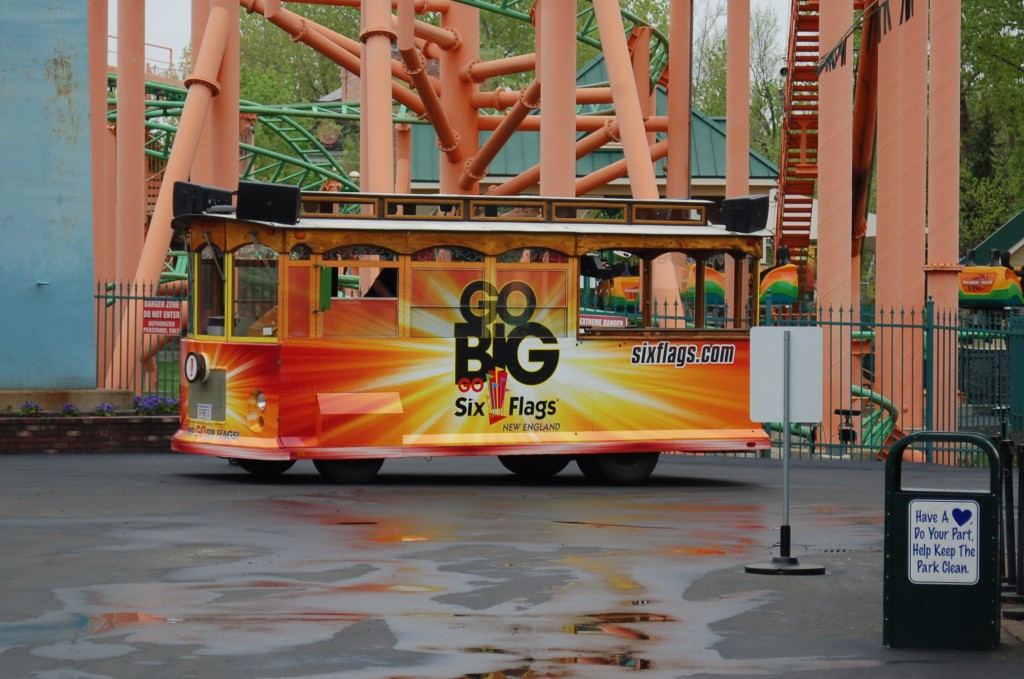 Something I thought was really cool was that they were shuttling people from the base of Main Street to New England SkyScreamer in the Six Flags trolley. It probably isn’t feasible but running this year round throughout the whole park would be pretty sweet. Definitely a unique experience.

The grand opening ceremony was held at 11 AM and shortly after the other rides opened. On hand to assist with the opening were members of the United States Air Force, New England Patriots Cheerleaders, and the Agawam High School choir. 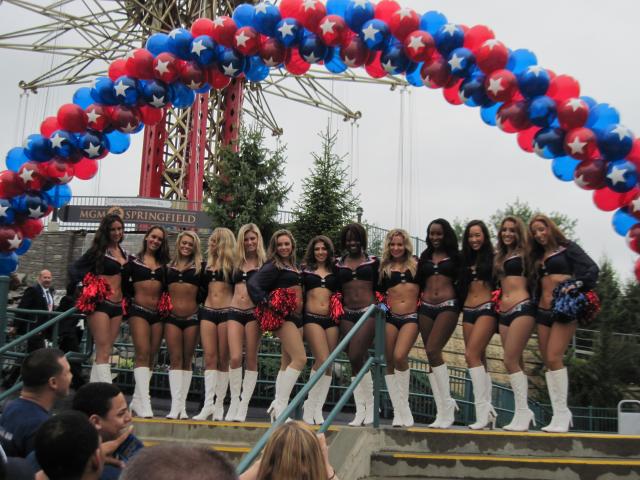 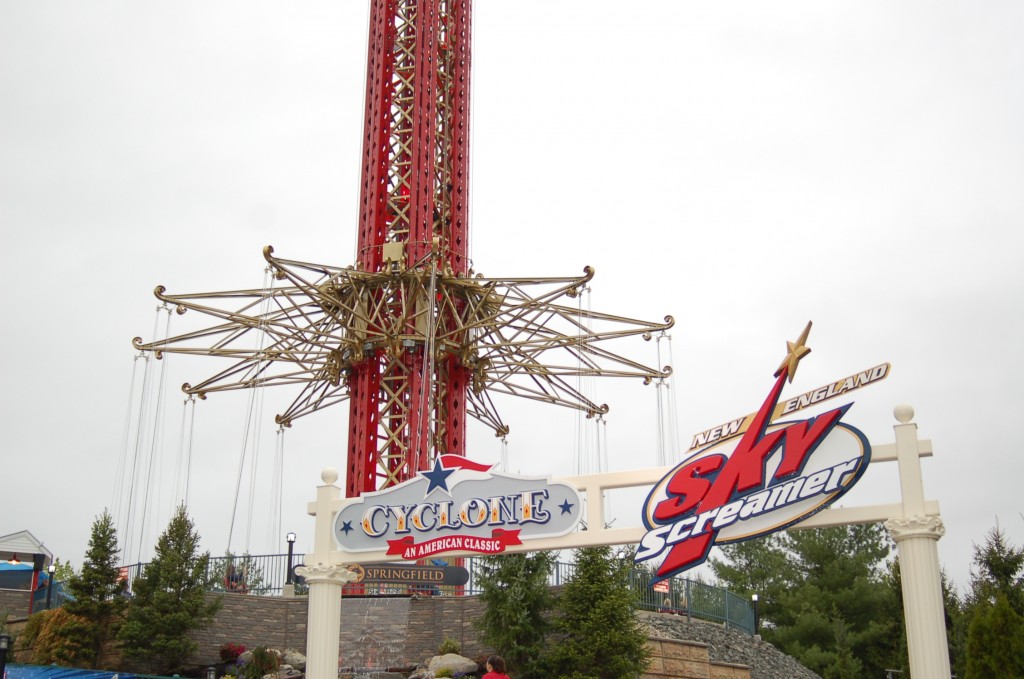 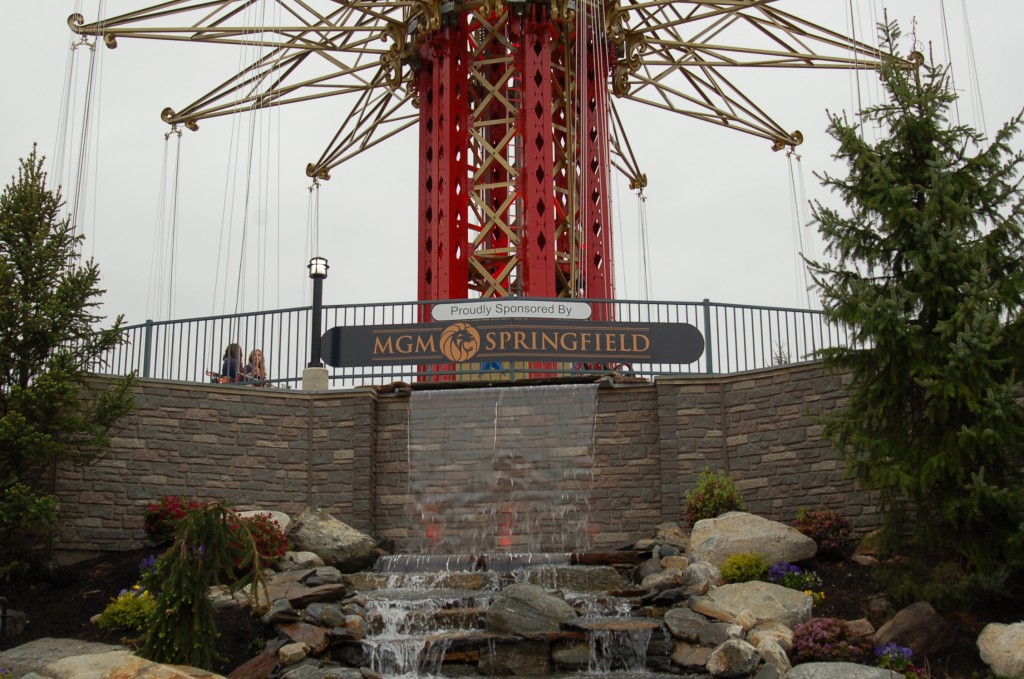 The new water fall looks excellent  – even with the MGM Springfield sponsorship sign. 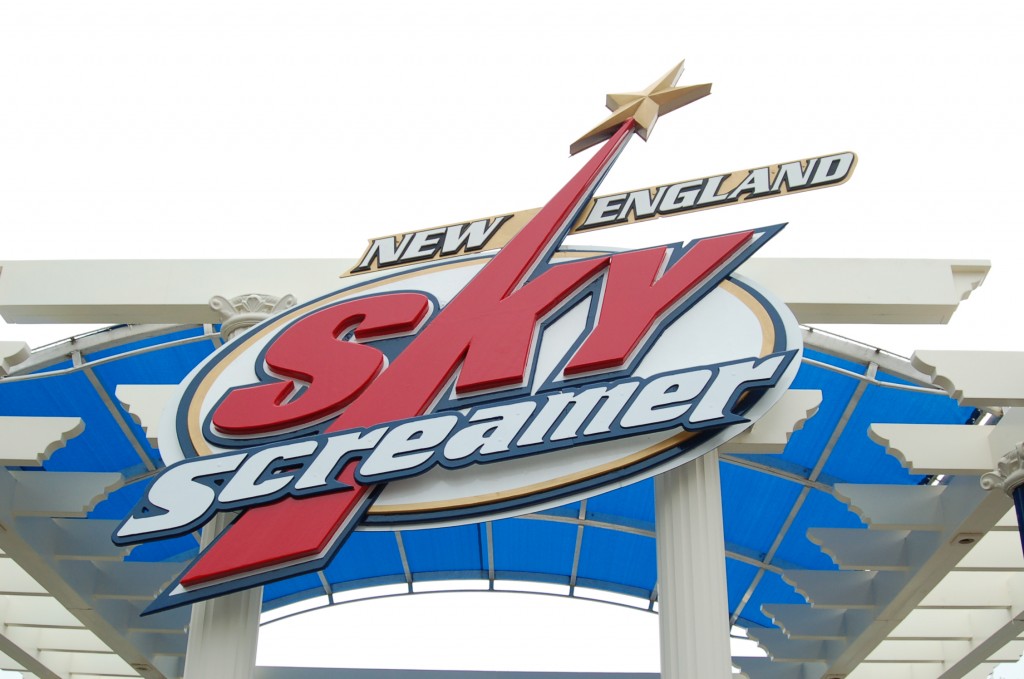 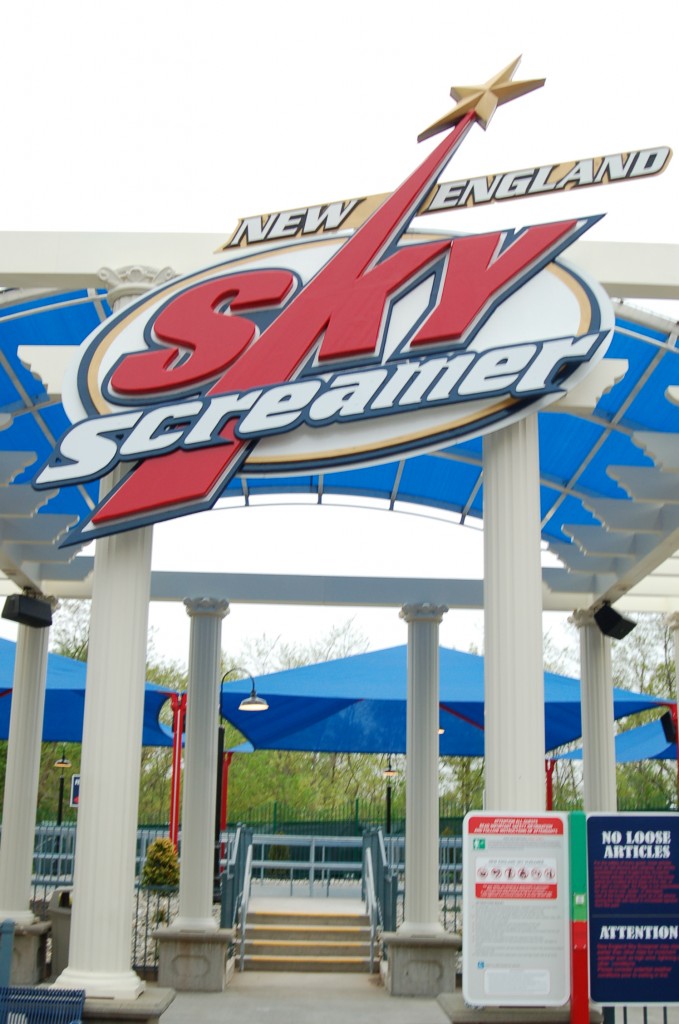 The area where the switchbacks were for Catapult have been made into a nice shaded seating area. 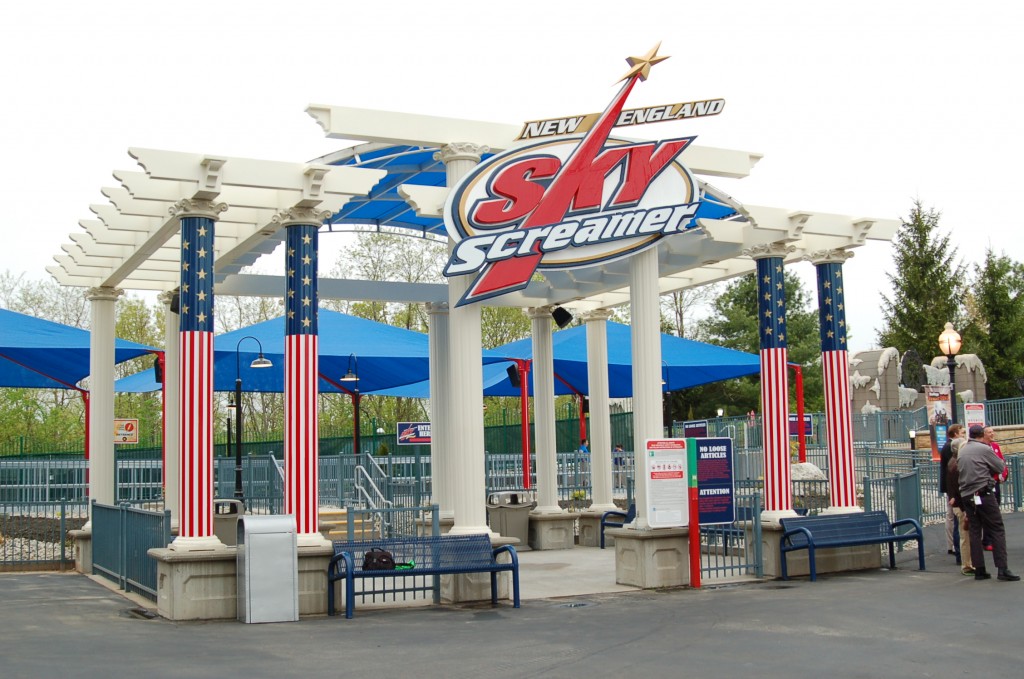 Overview of the former queue for Catapult. I love the American flag wraps around the columns. I think it’s a really nice touch. 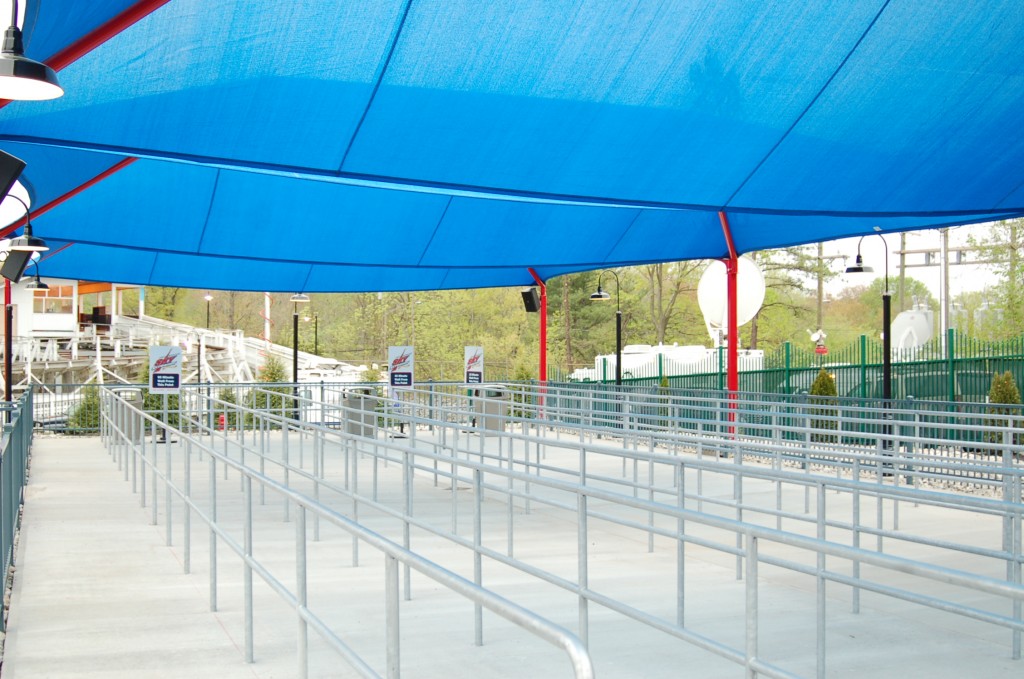 The queue takes up pretty much the entire space Catapult used to occupy. During the summer I think we will definitely see this line fill up. It’s essentially just one giant switchback. After going up the stairs into the queue, Flash Pass riders will take a left and follow the outside of the queue. Regular riders will take a right to where the picture was taken and go through the queue. Riders are stopped at the edge of the switchback area before entering the ramp to the load platform. There is a ride operator stationed there that will count off 24 people, those are the ones who proceed to the ramp. Once those 24 people enter the load platform, the ride operator count off another 24 people and the process repeats. If there is ever an uneven amount of riders that is when they will call out for single riders. 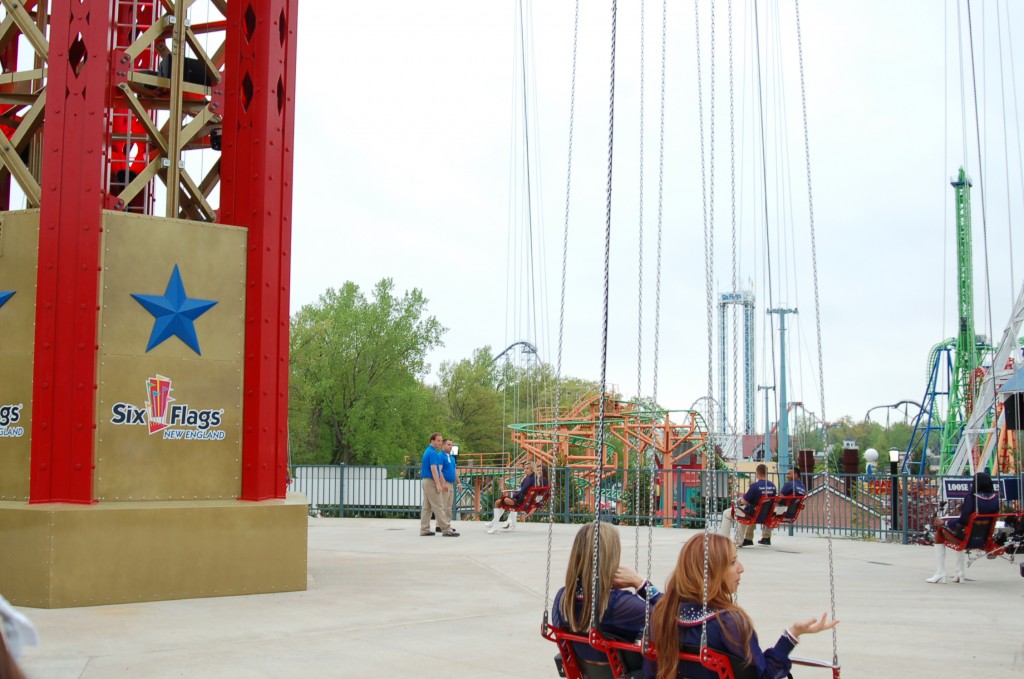 The load platform is very large. There are also two storage bins for your stuff. 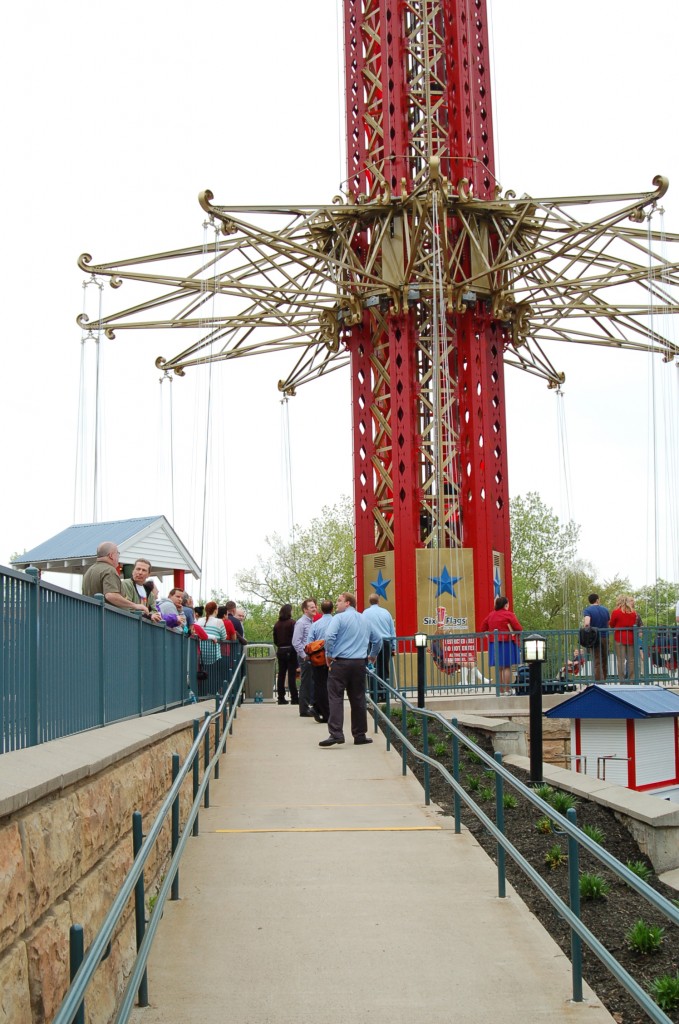 This is the exit. It was actually the old entrance ramp to Dare Devil Dive. To the left is where the 24 people will wait until loading. 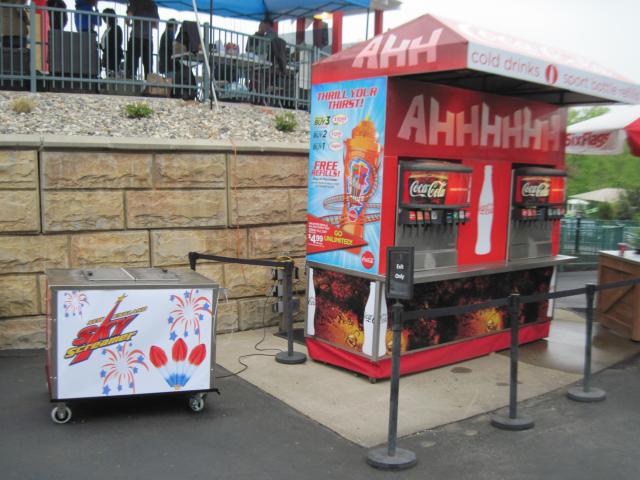 Other new things in the area were this drink and popsicle stand. By the exit was the new gift stand for the ride. It opened up later in the day. They sell a variety of New England SkyScreamer shirts here. I think it would be cool if they also sold some Cyclone merchandise here since I don’t think any store in the park sells Cyclone merchandise. 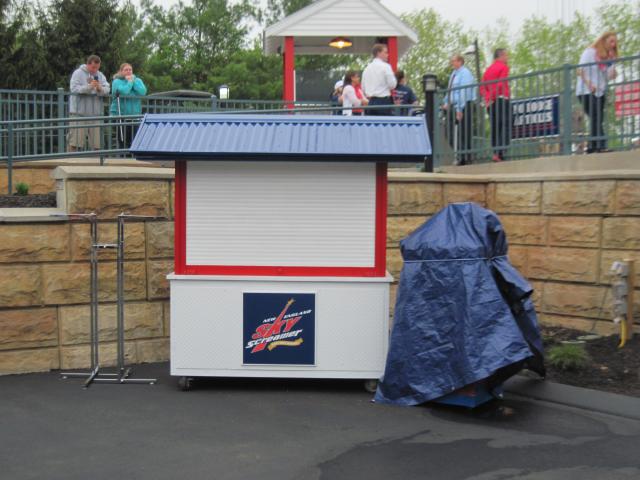 Here are some pictures of the t-shirts. 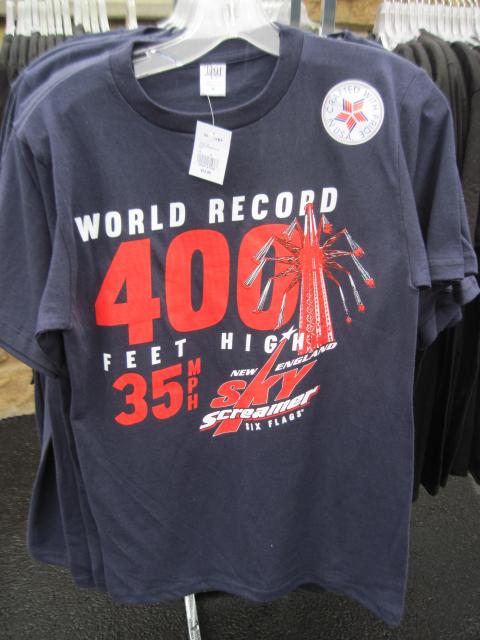 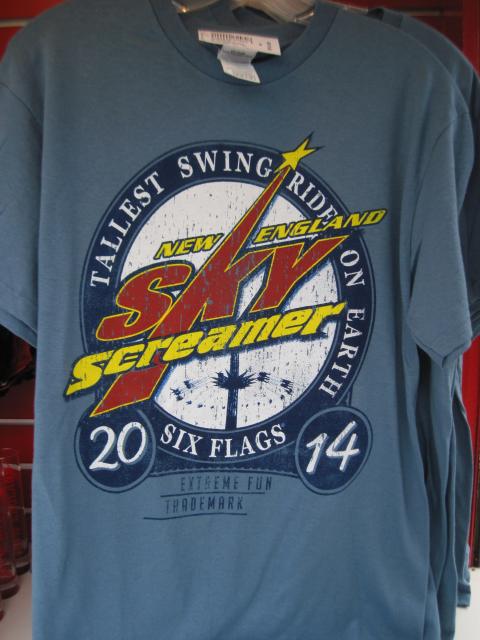 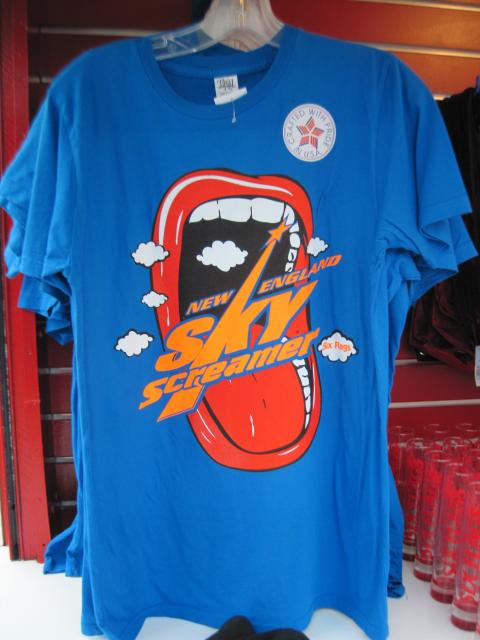 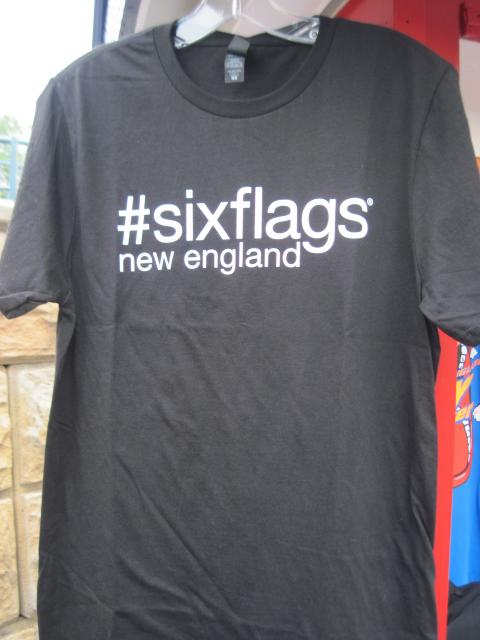 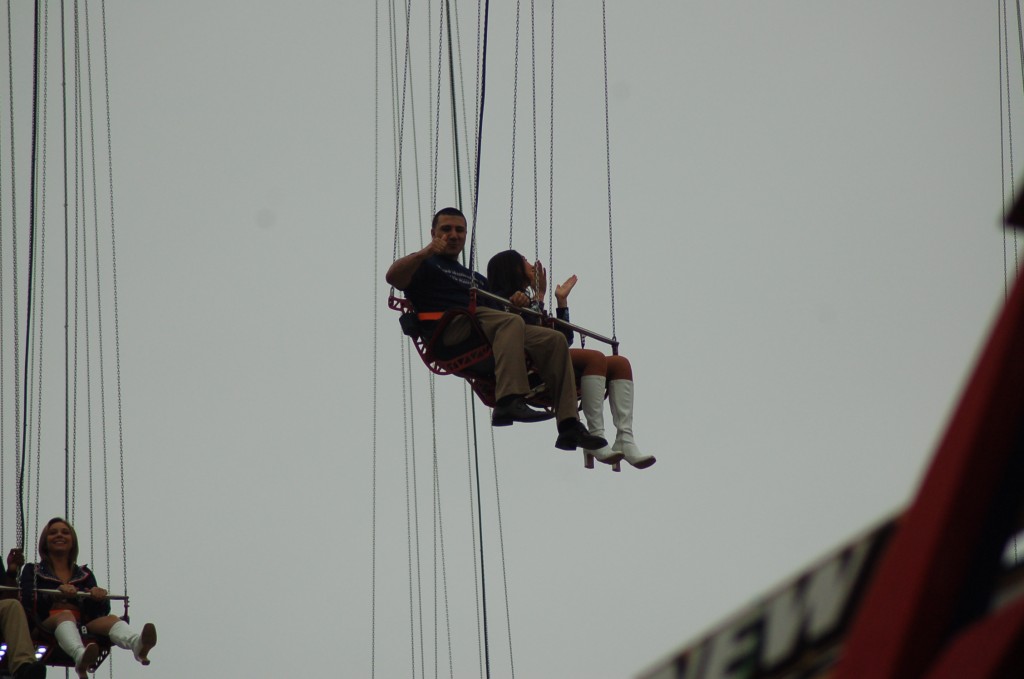 So yeah. New England SkyScreamer review time. The loading process is very fluid and seems like it will be easy for the ride operators. The restraint systems are electronic so there is no chance of you falling out. The bar that goes over your lap has a wire that comes down into your seat. It isn’t like regular swing rides though. Then the orange seatbelt that goes over your torso connects to the middle of the seat. Once the ride operator pushes the button they are electronically locked and there is no way to pull them out yourself. From there the ride operators just go around, check the restraints and your off.

As soon as you lift off the ground the music starts playing. I never heard the same song twice so I don’t know how many songs play through it. There are 35 speakers placed through out the tower. It seems like they’re activated from the gondola so that only the ones near the riders play. I preferred the movie score songs they played to the actual songs. The scores seemed to enhance the ride more than an actual song did. 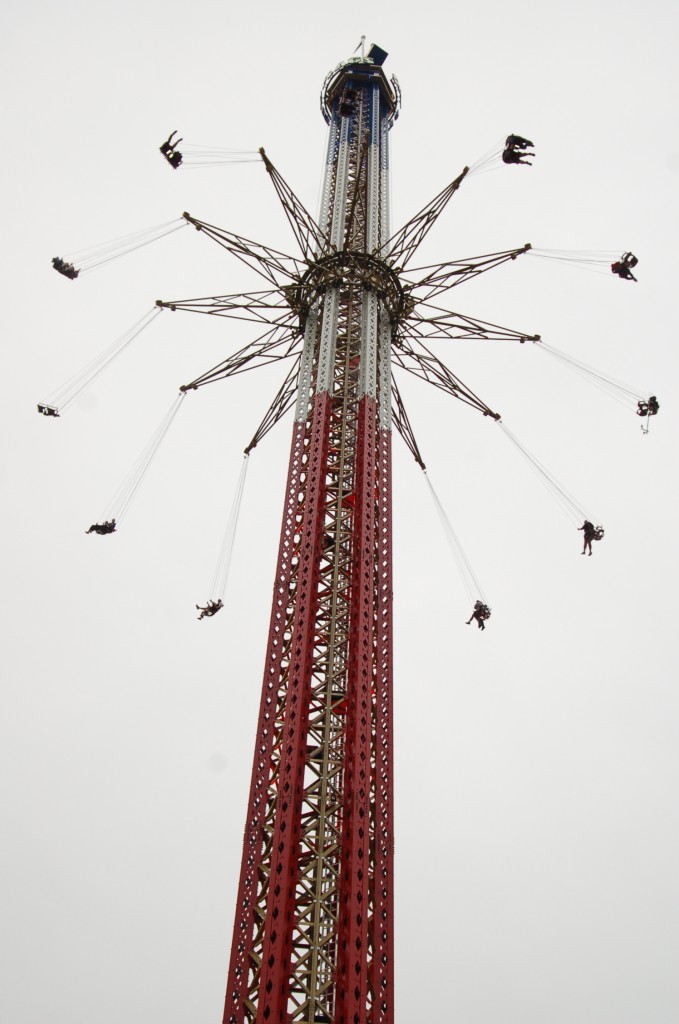 Here’s my review on it. I really enjoyed the ride. Even though it wasn’t an over the top thrill ride (I knew it wouldn’t be going into to it) it was A LOT of fun. It seems like no matter what you are going to whip around when you get to the top. At some points your chair even spins around backwards. The scariest part is when it swings in a way that makes you look straight down at the ground. My only complaint, and it’s a minor one, is that the ride cycle was short. I feel like you don’t get enough time to take in the few. But I understand why it’s so short. They want to get as many people through as possible so it makes sense. 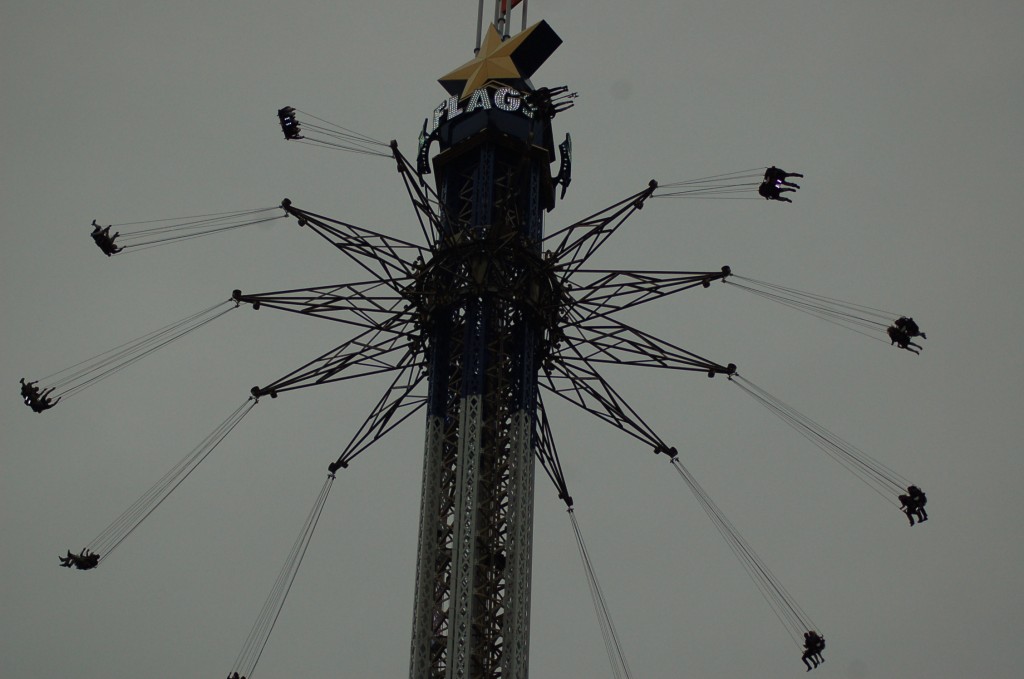 Here are some other reviews from members of the site:

The restraints give you such an incredible open feeling, which adds to the excitement of being 400 feet high. When you’re up at the top it gets so windy that the chairs even start turning, adding to the thrill of the ride. My personal favorite part of the experience is the fantastic view you get of the Connecticut River. NESS is a great addition to the park, and will thrill guests for years to come. – Dan

I thought the ride was really fun and something you could re-ride again and again. The view was awesome, especially looking down at how small all the other rides were. I also figured out that if the heavier person sits in the inner seat you will spin more at the top. – Aj

At first the tower doesn’t seem that intimidating from the ground, but once you are actually 400+ feet in the air and spinning at 35 mph you realize how crazy it is. The ride is a lot of fun and my only wish is that the would run they longer cycle so we could experience more of the ride and take in more of the view. – Spencer 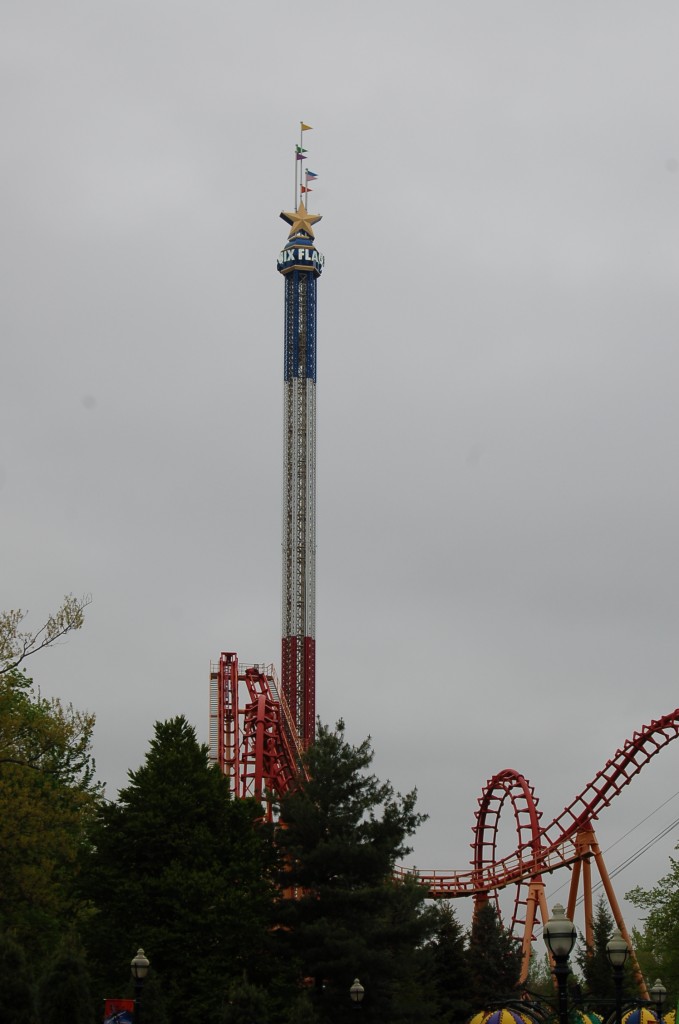 One last thing to mention before we close out this post. Be sure to stay at the park until it gets dark out or else you will miss New England SkyScreamer’s stunning light package. I will let the picture do the talking. 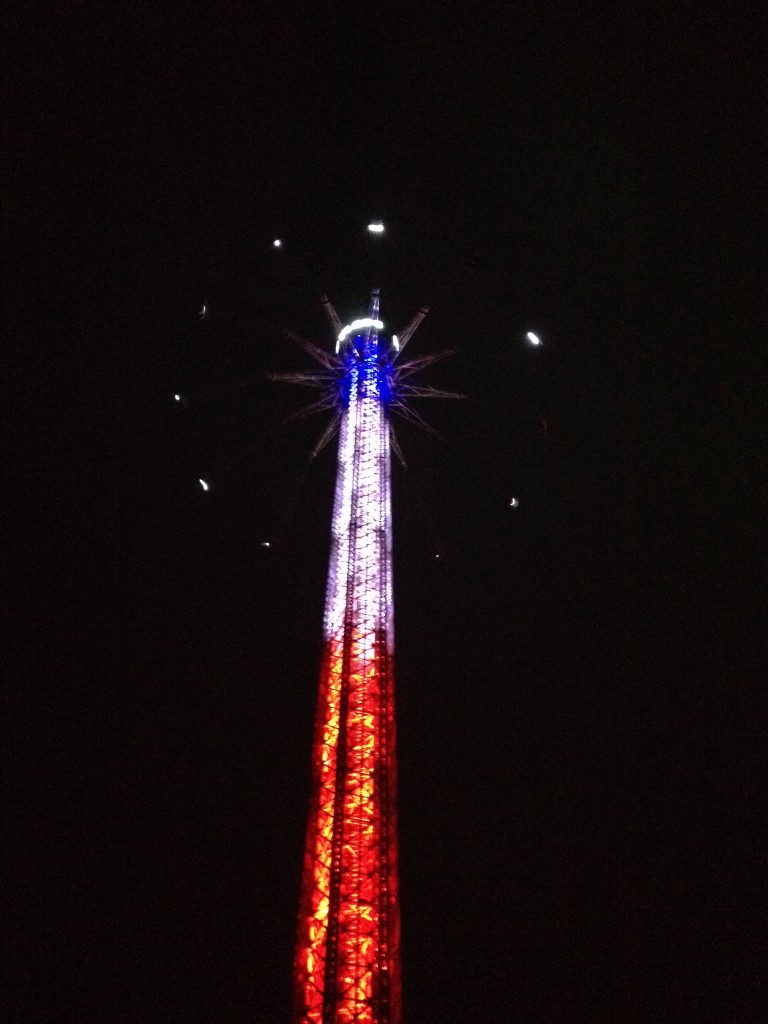 All in all, New England SkyScreamer is poised to be the next big hit out of Six Flags New England. It’s going to definitely be one of the top rides in the park for years to come. Thank you to the park for putting on such an excellent event. The food was great, like always, and opening up the coasters in the North End was a nice touch. Thanks for reading.