Since I’ve had about a week to digest the event that took place at The Dunkin Donut Center & Rhode Island Convention Center from November 10th, 2017 – November 12th, 2017 for RI Comic Con. I figure now was the right time to sit down and write my review of the event !

It started on November 9th for me as I went down to Dunkin Donut Center because I had it set up to interview The Incredible Hulk himself Lou Ferrigno ! We were allowed 15 minutes and I have already posted the interview already over at www.facebook.com/sfnonline where we did it live and you can also watch it below here : 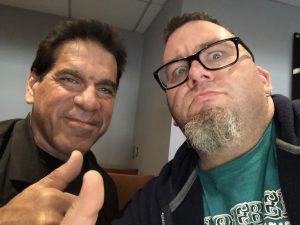 I Have to say this guy is a CLASS ACT ! He is humble , Sincere and Even talked with my son during the convention about being bullied, More on that later !  This is a great interview and highly suggest watching it !  It was also his birthday and he turned 66 years old ! I really do hope when I’m that old, I look half as good as he does !!! 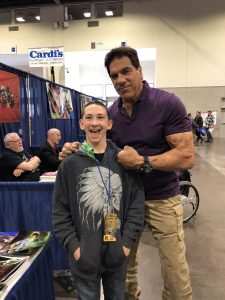 Myself and my two son’s arrive around 2 PM so I could get my press badge and then we hung around and took some pictures and waiting for everything to get started.  I was able to get the awesome VIP TICKET SWAG BAG , well before trying to get the press badge , I had bought the VIP TICKETS ! The swag bag had some pretty awesome items in it, bt the best item of all was the exclusive for RI Comic Con TIN Wind Up Star Wars Figure ! 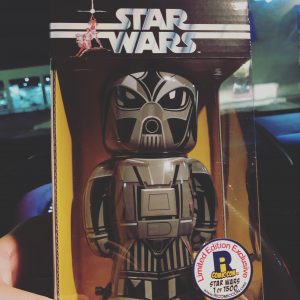 It also came with a comic book, 3 Art Prints and some other items for free ICE Cream, and other items that were advertising for the show !  I will say way better then what PAX East gives !

Before they let everyone in they had their opening ceremonies which had a bunch of people, COSPLAY people and Elijah Wood to cut the ribbon and officially open RI COMIC CON.  TOTAL Attendance was estimated to be at 60K before the show, but not sure what the final attendance number was at this time !

Once things were underway we walked around to check things out and saw tons of venders , selling some pretty awesome stuff!  POP Figures, toys, Comics, Clothing, Everything under the sun ! Also in The Dunkin Donut Center on the MAIN FLOOR was the big time Celebrities like Gene Simmons From KISS , Christopher Lloyd, Batista , PEE WEE Herman, Weird AL  and a bunch of other top tier guests !

So as we moved along we headed to the sky bridge to get to the convention center, This is where the main action was ! Vendors, more celebrity guests from movies like Revenge of The Nerds, Plus TV shows like Incredible HULK, Stranger Things, Star Trek, Wrestling Stars , Star Wars actors ! It was amazing to see a ton of my favorite actors from a variety of shows & movies !

WE wandered through all the cool displays , especially the Star Wars one at the Toy Vault Vendor booth! 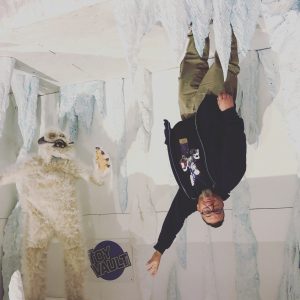 After checking all of this out we headed to the 5th floor, this is where the 501st was , along with the panels , as well as Walking Dead Actors! 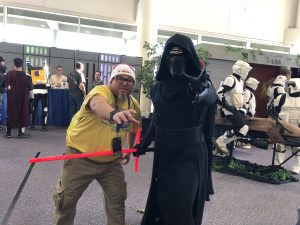 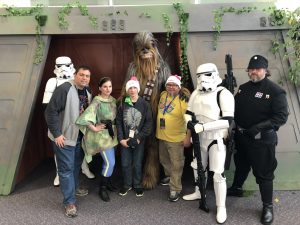 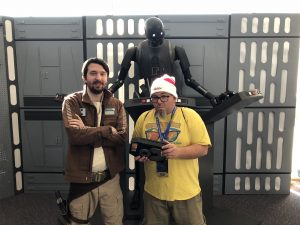 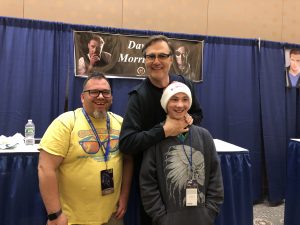 I had to laugh because when we met Walking Dead Character ” The Governor ” He is a lovely British man, very proper and polite, turns to my son and says lets take a picture and I’m going to choke ya ! We were laughing and having a great time ! Its little moments like this, that just make the experience that much better !

Now we did manage to catch Revenge Of The Nerds Panel , which hopefully you all have watched by now, because it is hysterical, informative and just great to see the cast back together and find out what they are doing after all these years ! also one of the cast members is responsible for bringing temporary tattoos to market ! I guess you will have to watch to find out who that was !!!

We did come across a pretty cool vendor that was selling MYSTERY BOXES ! SO I bought myself, The kids and Jessica a MYSTERY BOX  and there was some cool stuff inside and we will post a video after with that ! 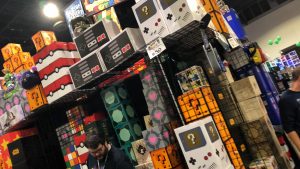 So once the show was over we headed out to Jessica’s house for the night after a stop to IHOP !

Luko met us at IHOP the night before , so now the 5 of us were ready to ROLL out and take on day # 2.  We went back thru the awesome press door, which skips all the other entrances and makes life easier , especially when dealing with the crowds ! We got Luko his badge and off we went for DAY 2, but before we entered we had found out on FRIDAY that Norman Reedus and a coupe of others from the Walking Dead had to cancel, DUE to AMC keeping them to finish filming the Season 8 Finale ! A lot of people were bummed out ! I was bummed out, but at the same time I was still having fun! With all the awesome PANELS, VENDORS, ACTORS that were there and there was tons of them to see! So at the end of the day I was still happy, I was still covering the event , like I would any other, I didn’t let that take away from what had happened! Its life and RI Comic Con had zero control over who cancels!

We tried to get to the Rick and Mortys Panel and failed as it hit capacity  so we could not get in ! We did how ever do The George Wendt ” Norm ” from Cheers & Stranger Things Panel ! Which were 2 other awesome panels !

I do believe RI Comic Con did not realize the star power of Stranger Things because they switched rooms with Gene Simmons and gave Stranger Things the bigger room, which I personally thought was hilarious myself !

We did venture through the main hall to see guests & vendors and bought another round of Mystery Boxes! I also wanted to note that on Day 2 that I brought my youngest who has been going through getting bullied over to Lou Ferrigno, so we paid for the Photo for him to take a picture with Lou Ferrigno and they spoke for a bit about him being bullied and it really has helped my son , which was awesome ! I know bullying is part of life and will probably continue forever, its human nature and I just help my son the best way possible on how to deal with bullies and helping him build confidence to be able to deal with it so he doesn’t become another kid that does harm to himself over bullying !   After our Mystery Box purchases we headed out to Denny’s for dinner then back to Jessica’s for another sleep over before heading back for day 3 !

This was the final Day and by now our feet wanted to fall off by now from all the walking, but still having tons of fun ! More panels to see, More Guests, more vendors as we kept marching along making sure we did not miss anything !  We did manage to catch Weird Al & Back to the Future Panel !!

We all know Weird AL from all his classic parodies from over the decades ! So in the video he talks about movies, his upcoming tour , Future projects and things he would like to do in the future ! He is such a legend !

It was also great to see Tom Wilson & Christopher Lloyd after all these years get together and talk about Back To The Future !  Also the great story about Doc Brown riding Back to the Future the ride at Universal Studios !

The sad news, was after this panel, it was time to end the weekend and head on home !

Now this was my first RI Comic Con, actually my first Comic Con period ! So I did not know what went down! I will say over all the show ran smoothly, minus a few hiccups with the crowds and Panels. It was pretty crowded every day and I know people were upset with a lot of things. Anybody who had a photo op with a canceled guest got a refund and I know a lot were upset with Norman Reedus not coming, but at the end of the day it was a fantastic event!  I bought some cool stuff, meet some cool celebrity guests ! The photo Op Tent was pretty neat and heated ! Its a bit of a cluster  and my suggestion for the future is make some queue lines for guests , instead of herding us like cattle in the waiting area, or at least have someone at the door actually checking times , trying to get to your photo op was tough sometimes as people were rude and would not move ! I would work on that for next year !

The Sky Bridge to get from Dunkin Donut Center to The RI Convention Center was a nightmare at times with the crowds and not sure how to fix that !

The VIP line for the smaller Ball Rooms wasn’t easily accessible when you had a panel like stranger things, I would of put some type of queuing area over there , this way it keeps people to the wall and helps from having people trying to cut the lines, like some kids were trying and we tossed them to the back of the line !!!

Even with some set backs, the event is still worth the ticket price and its a fantastic time! All events have issues, I’ve never been to one with  zero issues ! Also to those that were really upset with guest cancelations , it happens at every type of convention from A to Z ! its part of the business, they are mostly working actors and they make their living off of making TV SHOWS, COMMERICALS, and MOVIES ! IF they get a role they aren’t going to skip it to come hang out with us for a few days ! So honestly get over it !!!  Things happen !

Anyway, I totally recommend RI COMIC CON and we will be posting a video showing off the event and all the cool people we saw, met, the awesome COSPLAY and so on !

I also want to thank Susan Sores at Altered Reality Entertainment Press Office, for allowing me to interview Lou Ferrigno, Obtaining a press badge to cover the event and for being so kind to answer the million questions I had ! I hope to return TO RI Comic Con next year and bring even more coverage !

Trust me when I tell you guys ! This event was awesome and its local for most of us ! IF not its honestly worth traveling to ! The biggest Show in the Smallest State left me with memories that will last a life time ! Until Next year RI Comic Con Fans !